At the request of Rep. Connolly and the Somerville legislative delegation, DCR and the City of Somerville will schedule a public meeting in December to offer an opportunity for local residents to provide input as plans for the park are considered.

In 1951, the Metropolitan Parks Commission (DCR’s predecessor agency) acquired the land that would become Foss Park from the City of Somerville. In 1955, the parcel was dedicated to WWI solider Saxton C. Foss by the state legislature.

The 14-acre park includes a multi-sports field, several baseball diamonds, pool, spray deck, playground, and basketball and tennis courts, among other open space and trees. It's known as the most popular and widely-used field in the city, and like much of Somerville's open space, it is owned by the Commonwealth of Massachusetts.

Currently, Foss Park’s multi-sports field is in denigrated condition with drainage issues and dysfunctional light features. The multi-sports field's natural turf is under constant pressure from activities such youth football, soccer, and others, and overuse of the field has led to "dust bowl" conditions. 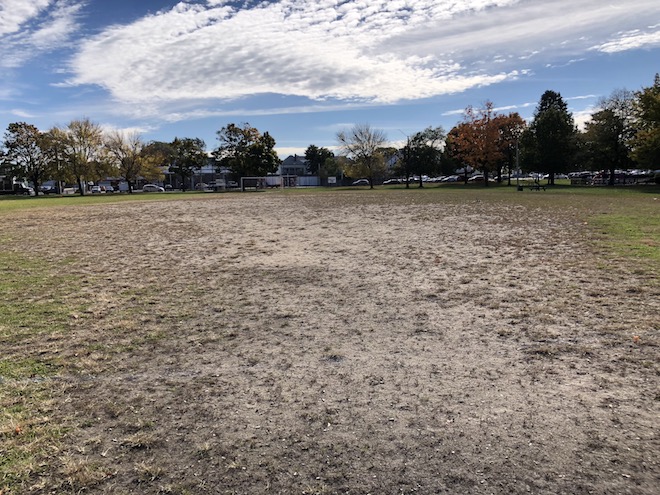 Over the past two years, Rep. Connolly has heard from several constituents, including many parents and coaches, who have complained about the conditions of the multi-sports field while also calling for permanent field lighting. It has also been reported that players are constantly twisting ankles and getting scrapes from the uneven dirt surface.

Many people would prefer a natural grass surface for the multi-sport playing field — and some residents are firmly opposed to DCR's plan for field turf at Foss Park.

However, DCR officials have concluded there is no realistic way to maintain a natural grass surface for the multi-sports field at Foss — at least not without having to limit access to the field — because the field does not have time to recover from frequent use.

The public meeting in December will provide an opportunity for residents to offer input as improvements to the park are considered. In the meantime, Rep. Connolly is always available to listen and respond to constituents and stakeholders. Please email with any questions or concerns.

Mitigating factors and other opportunities

Rep. Connolly recognizes there are many concerns with synthetic turf fields, especially fields with a crumb rubber base.

DCR has indicated that this turf field will not be a "rubber crumb" or "crushed rubber" turf field. Rather, DCR will be using sand as the infill for the field, which is more environmentally-friendly.

The field will also have a 17mm Shock Pad that is designed to help mitigate injuries. DCR has also stated that the surface will be permeable and will actually do a better job of mitigating flooding.

At Friday's meeting, it was contemplated that this could an opportunity to build momentum for greater investment in other elements of Foss Park while continuing to engage the public. It should be noted the multi-sports field represents only a portion of the open space at Foss, and a substantial portion of the park will continue to feature a natural grass surface.

City-sponsored improvements, which should reflect community input and approval by the Board of Aldermen, could make a significant difference in the health and safety of people using the park. Improvements could include additional plantings, additional green spaces, berms or barriers to avoid near-roadway air pollution, and improved access points.

In addition, DCR has indicated a desire to continue improving other facilities at Foss Park, such as a future renovation of the Latta Brothers Swimming Pool. A renovated swimming pool would complement the new splash deck that opened in 2017.

Residents have also raised important questions about equitable access to the multi-sports field. Rep. Connolly strongly believes that access to the new field must be equitable, and current users of the field should be included in planning for its future operation.

DCR has indicated that the new multi-sports field will be surrounded by a fence; it will be a low fence, such as what can be found at the nearby tot lot. The fence is not intended to limit human access to the field; the purpose of the fence will be to keep dogs off the new playing surface. While dogs are appropriate in other parts of the park, DCR wants to protect the multi-sports field from any animal damage.

Importantly, DCR has indicated there will continue to be unscheduled or unstructured access to the field.

For several months, Rep. Connolly and other members of the Somerville legislative delegation have encouraged the Mayor's Office and DCR to work together to continue advancing a city-wide plan for the use of all open spaces in the city, including state-controlled spaces, with public involvement and approval by the Board of Aldermen.

As one of the most progressive and densely-populated cities in the United States, there is a strong demand for both protected green space and additional access to playing fields in Somerville. This challenge cannot be completely resolved within the context of a single site. Rather, a holistic, city-wide approach is necessary, and it could be noted that there will be opportunities to add significant new green space in the future, such as when the Inner Belt area becomes a focus for redevelopment efforts.

In addition, DCR's decision to install field turf at Foss Park follows some relevant local planning efforts, such as the city's "Fields Master Plan" process. That effort discussed tradeoffs with synthetic turf and helps explain DCR's position. According to the staff report: "Turf provides more playing time per field...more efficient...turf also eliminates the need for field rest after construction…allows us to renovate fields faster. Some have expressed concern about artificial turf. Fortunately, there are a number of safe and healthy options to choose from."

Since taking office last year, Rep. Connolly has joined with colleagues in the Somerville legislative delegation to advocate for state-level investment to help improve the poor conditions at Foss Park.

Efforts to secure state-level funding and a robust public meeting process have been ongoing — right up until the morning of DCR's announcement on Friday.

As soon as details of the public meeting are posted, our office will make that information available. In the meantime, please email Rep. Connolly directly with any questions or concerns.