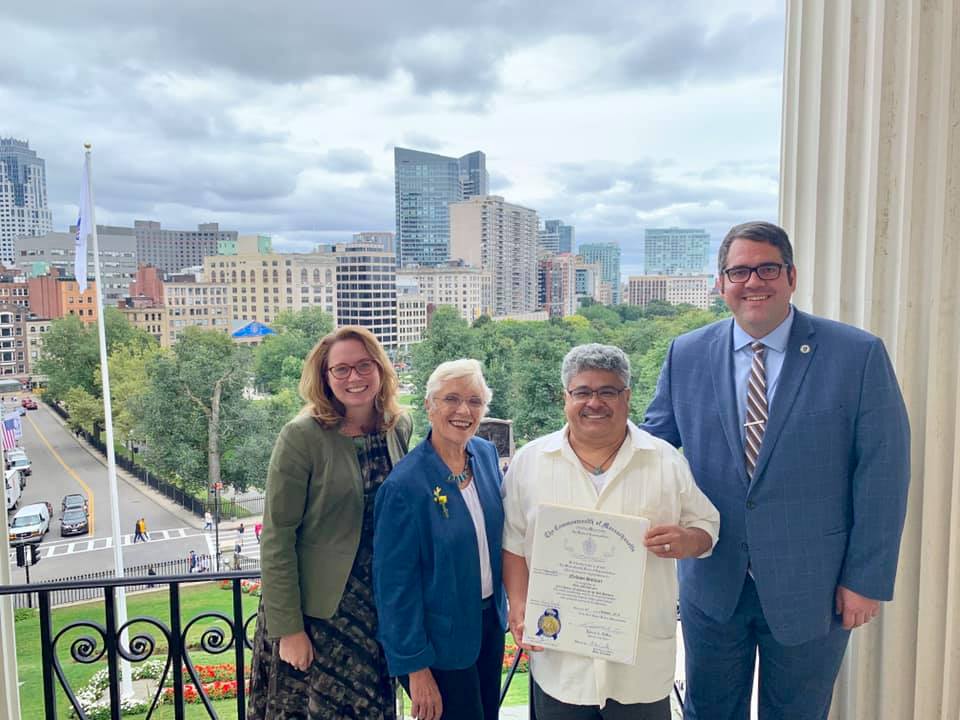 Nelson Salazar was recently honored by the Massachusetts Black and Latino Legislative Caucus at the second annual Latinx Excellence on the Hill day. State Representative Mike Connolly, along with Senator Pat Jehlen, and Reps Provost and Barber, nominated Mr. Salazar for this recognition because of his deep commitment to social equity in Somerville and across the Commonwealth. Mr. Salazar was honored with other members of the Massachusetts Latinx community on Thursday, October 3rd, in the Great Hall of Flags at the State House in Boston.

Originally from El Salvador, Nelson left for the United States in 1980 when his country was about to experience one of the worst civil wars in Central America. Like many immigrants, he started working as a dishwasher in the Boston Area. He loved cooking and decided to go to school to get his associate degree in Culinary Arts from Bunker Hill Community College. After working for many years in local restaurants and hotels, he decided that his mission was not in the food industry; but rather to help others. He attended UMass Boston’s College of Public and Community Services, a non-traditional program designed for adults, where he received a Bachelor’s Degree in Human Services and Community Planning. While at UMass Nelson was accepted to participate in the Latino Leadership Opportunity Program. Nelson has worked at Centro Presente, Cambridge Human Services Department, Concilio Hispano de Cambridge, The Welcome Project, and Somerville Center for Adults Learning Experiences (SCALE). As Executive Director of The Welcome Project in Somerville, he initiated many productive collaborations with Tufts University, as he strongly believed college students must have a chance to put into practice the theories they are learning. Nelson later went on to obtain a Master’s in Public Policy from Tufts University. While at Centro Presente, Nelson coordinated Temporary Protective Status for Salvadorans, one of the first nonprofits to do so.  Nelson has lived in Somerville for almost 40 years and currently works as the Enrollment Coordinator at the Riverside Early Head Start program.

“I am proud to welcome my constituent Nelson Salazar to the State House to be officially recognized as a distinguished leader of the Latinx community in the 26th Middlesex District,” said Rep. Connolly. “Thank you, Nelson, for all that you do to lift up immigrants, fight for justice, and for truly embodying the progressive values of our Somerville and Cambridge community.”

Created in 1973, the Caucus remains a voice for Massachusetts' communities of color in the Legislature. They seek to empower constituents to gain a deeper sense of political awareness on issues concerning them and their greater communities. The MBLLC’s thirteen legislators remain dedicated to serving communities of color throughout the Commonwealth through legislative, budgetary, and community endeavors.