Every ten years, the Massachusetts Constitution requires us to redraw legislative districts to adjust for population changes across the Commonwealth.

This week, the legislature's Joint Committee on Redistricting released proposed new maps based on the results of the 2020 Census. Typically, this process occurs at a more deliberate pace — however, the Trump Administration did all they could to disrupt the census last year — and as a result of that and the pandemic, compilation of the data was late this year.

Redistricting is further complicated by the fact that population growth has been very uneven across Massachusetts. The metro Boston area gained residents, the Berkshires lost residents, etc. But the redistricting law requires all House districts to be within 5% of the mean district size of 43,937 residents.

Because the 26th Middlesex District includes several major sites for new housing development — from Assembly Row to Cambridge Crossing, from Union Square to Central Square, from East Cambridge to East Somerville and parts of Kendall Square, et al. — our district is now over the statutory limit for population. We have to shed some residents during the redistricting process to bring the district in accordance with the law.

When the redistricting process began, I had two main goals — first, to support the statewide effort to maximize representation for communities of color through the creation of more majority minority opportunity districts — and second, to keep the 26th Middlesex District geographically coherent for the people of Cambridge and Somerville while honoring our shared communities of interest.

I'm pleased to report the maps produced the House this week do an excellent job of addressing both of these goals.

The House is proposing to create every single possible majority minority opportunity district (i.e. districts where a majority of the residents are People of Color) across the Commonwealth — and despite all the complexities, this has been accomplished while maintaining the 26th Middlesex District as a district that continues to include East Cambridge, The Port, East Somerville, Assembly Row, Union Square, Inman Square, Wellington-Harrington, parts of Kendall Square, and Central Square.

However, as I will explain in greater detail below, significant population growth in our district, combined with the need to support the creation of a majority Hispanic district in Chelsea, means the 26th Middlesex District will be losing some residents — approximately one precinct in Somerville, and one precinct in East Cambridge. At the same time, our district will also be gaining all of Ward 5 in Cambridge (i.e. Cambridgeport).

The House's effort to create the maximum possible number of majority minority opportunity districts is aimed at undoing the injustices of redistricting efforts from past decades — where poor, urban, and BIPOC communities were routinely divided and submerged into districts with larger numbers of white, wealthy, suburban or conservative voters. This form of gerrymandering systematically deprived communities of color from better opportunities for political empowerment.

At present, 20 of the House's 160 districts are made up of a majority of People of Color. Under our new proposal, that figure would increase to a total of 33 majority minority opportunity districts. This exceeds what civil rights leaders and progressive activists in the Drawing Democracy coalition were asking us to do. They have been calling for a total of 29 majority minority House districts — and they are now applauding House Redistricting Chair, Rep. Mike Moran, for his extraordinary work on this difficult and complex task.

That said, given the proximity of the 26th Middlesex to the current Chelsea-Charlestown district (i.e. the 2nd Suffolk District), which has been a subject of focus for myself and many other progressive activists — it's perhaps unsurprising that our Cambridge-Somerville district is now subject to some changes. These changes will make it possible for Chelsea to get a brand new, incumbent-free district that consists of a majority Hispanic population. That means the Charlestown district (represented by Rep. Dan Ryan) will need to pick up about 20,000 more residents, including some folks in Cambridge.

Under the new proposal, Precinct 1 of Cambridge's Ward 1, which includes roughly half of the East Cambridge street grid that has traditionally defined the neighborhood, along with a significant part of Cambridge Crossing, would migrate over to a 2nd Suffolk district that will now include Charlestown and parts of Cambridge around MIT.

Finally, all of Ward 5 in Cambridge is being added to our 26th Middlesex District. This will help improve the geographical coherency of the Central Square area by putting Cambridgeport in a majority Cambridge district. I know Boston's Rep. Livingstone is sorry to see this change, as he's done incredible work for our community, particularly at Magazine Beach and in the legislature advancing a progressive agenda. But I am excited for the chance to represent Cambridgeport and to hopefully pick up right where Rep. Livingstone leaves off.

As I told Cambridge Day this week, it's sad to lose any part of the district I've been so honored to represent since 2017 — but I welcome these fairly modest changes in service of the larger goal of creating more opportunities for People of Color around the state.

Another note: these districts don't actually take effect until 2023. So for at least the next year, there is no change in representation for anyone. But according to the state constitution, we must pass a new redistricting proposal into law by November 8th of this year. The 2022 state elections will be based on these new maps, and winners of those elections will be sworn-in to office in January 2023. None of this has any impact on the 2021 city elections that are now underway.

In closing, I'm incredibly proud to continue to have the honor of being the only Member of the House to represent both Cambridge and Somerville. I recognize the deep connections between our two cities — connections that go back decades amongst immigrant communities and the working class — typified by unique traditions such as the Feast of Saints Cosmas and Damian and the presence of the headquarters of the Massachusetts Alliance of Portuguese Speakers in our district — and by historic efforts such as the fight to block the Inner Belt urban highway in the 1970's, the more recent fight to advance the Green Line Extension and the Community Path Extension, and so much more. Our district has also been a national leader in public housing — with some of the very first public housing projects in the nation at Newtowne Court and Washington Elms.

I'm constantly inspired to work with others to address shared challenges across our Cambridge and Somerville district — challenges that are in many ways driven by living in the shadow of Kendall Square while being surrounded by major rivers during this time of man-made climate change. From exorbitant housing costs and relentless displacement pressures, to our need for greater investments in public transportation, childcare, and bike and pedestrian safety, to the ongoing emergencies of climate vulnerability and all too persistent poverty and gun violence — there's so much more work to be done.

I'm also very interested to hear your feedback and answer any questions you may have about where we stand in this process.

To review the proposed House districts and to learn more about the process, please see this page.

Tomorrow, at 1 pm, the legislature's Joint Committee on Redistricting will conduct a public hearing to listen to feedback on these draft changes. To participate in the hearing, or to just watch and follow along, please see the instructions on this page.

For more background and context on this process, I recommend checking out the Drawing Democracy coalition webpage.

As always, please do not hesitate to reach out with any questions or concerns about this or any other matter.

P.S. A rendering of the draft proposal for the 26th Middlesex District is available here in .pdf format and is also depicted by the following image... 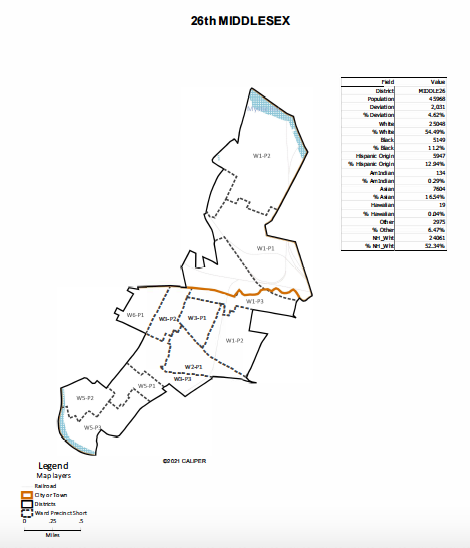