I'm pleased to report the House of Representatives this week adopted my amendment to fund a study of noise impacts and mitigation opportunities relative to the Grand Junction Railroad in East Cambridge and the Commuter Rail Maintenance Facility in the Inner Belt section of Somerville as part of our FY22 state budget process. 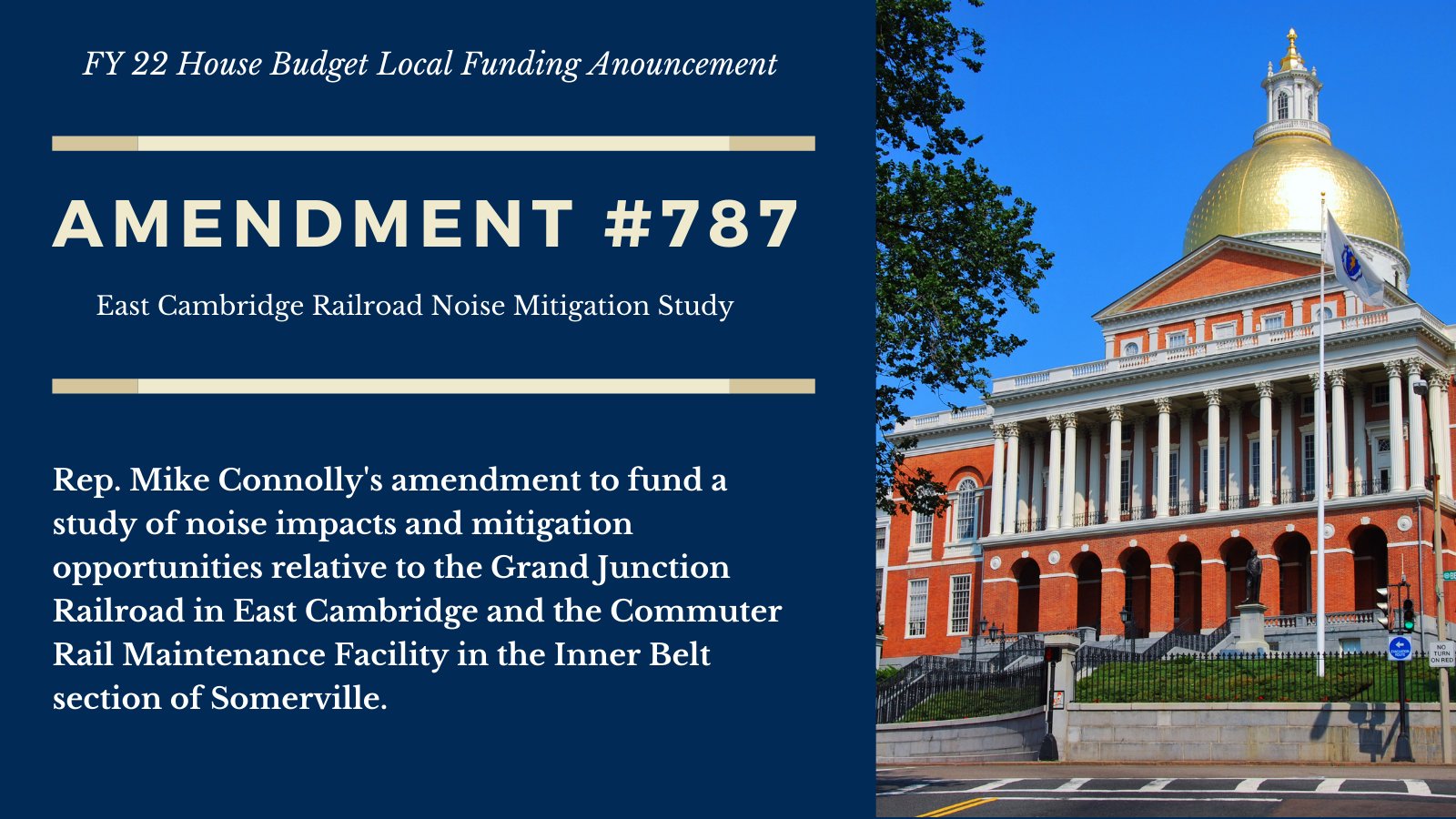 The adoption of this amendment adds momentum to the efforts we are making to address this critical quality-of-life issue; see my March 3 letter to the East Cambridge Planning Team and read on for more information.

Kendall Square is famously known as the most innovative square mile in the world — but at present, the 19th Century Grand Junction Railroad cuts through Cambridgeport, Kendall Sq., and East Cambridge as the only quick way the MBTA can get trains from the southern side of the commuter rail system over to the Commuter Rail Maintenance Facility (a.k.a. the Boston Engine Terminal) in Somerville's Inner Belt.

Often, these locomotives idle for 30 minutes or more in the middle of the night on the Grand Junction track — and this typically occurs in a location that directly abuts densely populated apartment buildings and residential streets in East Cambridge and Wellington-Harrington, between Binney Street and Cambridge Street, near an area also known as Linden Park.

I once again received reports of intolerable train noise in East #CambMA this evening — so I am out here documenting it. This @MBTA_CR train just came up the Grand Junction, parked for about 15 minutes in a densely-populated neighborhood, then went back in the opposite direction. pic.twitter.com/ZUA5XMkggq

Once the trains are cleared to proceed, they go over to the Maintenance Facility, where numerous trains are often kept idling throughout the evening in a location known as Yard 14. In many cases — particularly when it’s cold out — the diesel locomotives have to idle with two different engines running or else the fixtures/systems relative to their restrooms could freeze and break — this sounds hard to believe, I know.

Some MBTA officials have speculated that perhaps the new developments at Cambridge Crossing are changing the way the noise is being perceived by the East Cambridge neighborhood, perhaps because it is echoing off of some of the new buildings. Others have wondered if the increase in noise is being exacerbated by night work on the Green Line Extension project, by numerous ongoing construction projects in the vicinity of Kendall Square, along with noise that comes from commercial laboratories and the Kendall Cogeneration Station.

While there is no doubt there are a variety of noise issues impacting the East Cambridge neighborhood, my own late night field trips to document the noise (several of which I’ve posted to Twitter), along with the convincing, consistent testimonials of my constituents, make it clear to me that the Commuter Rail Maintenance Facility does appear to be creating a serious issue with respect to noise and vibration.

At the request of myself and Senator DiDomenico, the MBTA conducted some noise monitoring of the maintenance facility circa March 8 through March 12. However, the results of these tests weren’t very conclusive to me or to City of Cambridge officials who conferred with me in reviewing the initial data. It wasn’t clear what locations were used to collect the data, what activity was ongoing in the rail yard at the time of the data collection, what the weather conditions were at the time of collection, or what methodologies were used to perform the collections.

The recent initial sound monitoring materials that I have been provided by the MBTA are as follows:

I now have a request pending to the MBTA for more context to this information, and because of this, I have asked MBTA officials to commit to joining with me for a meeting with concerned East Cambridge residents, and the T has finally now agreed to do that meeting. We are now working to schedule this meeting in the coming weeks.

This week, the House of Representatives adopted my East Cambridge Railroad Noise Mitigation amendment as part of our consolidated amendment relative to transportation. The goal of the budget amendment is to provide some funding (at least $30,000) to support additional analysis of all the railroad noise issues that are impacting the East Cambridge neighborhood and its surrounding environs.

Ultimately, I am interested in the potential for obtaining several things: 1) professional sound monitoring at different neighborhood and facility locations followed by meaningful analysis; 2) modeling to see how the sound coming from the maintenance facility may or may not be echoing off of the new buildings at Cambridge Crossing or otherwise interacting with the changing local landscape; 3) conceptual plans or recommendations for how the maintenance facility sound issues can be mitigated, and 4) analysis, recommendations, feasibility, and/or design concepts for how we can move toward better signaling systems and better management of locomotives on the Grand Junction Railroad.

In addition to this state budget earmark, the MBTA has indicated to me that they maintain ongoing general engineering contracts with a variety of consultants to perform work as needed and that they would be open to engaging with the relevant professionals they have on call to help address these noise issues. So, the adoption of this budget amendment is really intended to add momentum to our collective efforts in addressing these issues. The exact scope of the study called for by the budget amendment is to be determined and will be informed by future meetings and conversations with myself, Senator DiDomenico, the MBTA, Keolis, East Cambridge residents, the City of Cambridge, and other relevant stakeholders.

The FY22 budget now moves to the state Senate, and from there, a conference committee will be tasked with getting a final version to the Governor’s desk before the end of the current fiscal year on June 30.

I think the next key step will be the meeting we are now working to organize with T officials and affected residents in the coming weeks. In the meantime, please reach out with any questions or concerns.