Last week, our community was shaken by news of another cyclist killed in Cambridge.

The 24-year-old victim, Meng Jin, was from Shanghai, China and moved to Cambridge in September to begin graduate studies in economics at Boston University.

According to witnesses, at around 8:12 am on Friday, Sept. 9, Meng was traveling on Museum Way in Cambridge when he was struck by a dump truck that was making a right turn from Museum Way onto Route 28/O’Brien Highway.

Over the past nine days, I have been in touch with many constituents who have reached out to express sadness, concern, frustration, and outrage at this latest tragedy and the ongoing perils of biking and walking along Route 28 as it passes through Cambridge.

I have also been in close contact with other state and local officials and advocates as we mourn the loss of Meng Jin and work to understand what happened and push for badly-needed improvements to the intersection of Route 28 and Museum Way. We also must continue pushing for Vision Zero policies across all our neighborhoods and communities.

I have heard from several witnesses who have provided a similar account of the events leading up to the crash; these accounts seem to contradict the description of the crash in the preliminary report issued by the State Police last week.

These accounts appear to contradict the preliminary report and several media reports that followed, all of which stated that "the truck was...waiting to take a right turn onto Museum Way from O’Brien Highway."

The crash remains under investigation by the State Police.

Museum Way — some background and next steps

This (Saturday) afternoon, I took this photo on Museum Way, showing the right turn onto Route 28/O'Brien Highway in the distance. 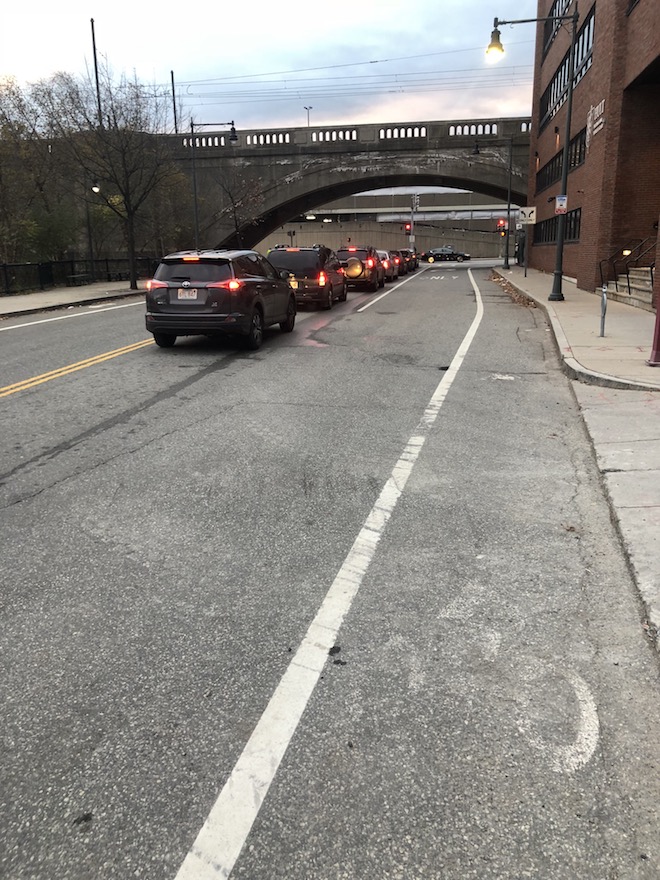 Museum Way is a Cambridge street with bike lanes in each direction. However, the street has been criticized by local residents for having an "incessant line of trucks...on their way to or from Boston Sand & Gravel or the nearby weighing station."

In recent years, as construction activity has ramped up at Cambridge Crossing, EF, and other nearby locations, residents say the volume of trucks on Museum Way has grown. It is also a path frequently used by Duck Boats to access the Charles River.

Upon arriving at Museum Way this afternoon, I found an Uber parked in the bike lane with its driver standing outside on the sidewalk and talking on his cellphone. I also witnessed three large chartered buses parked in the street and blocking the bike lane in front of Hult International Business School on Education Street. The bus drivers were all standing together in front of the Hult building, apparently waiting for passengers to arrive.

In March, the Cambridge City Council adopted a policy order calling on the City to review what traffic-calming measures or other actions could be taken to improve safety along Museum Way.

On July 24, the City Administration responded with a memo that announced plans aimed at improving Museum Way the Route 28 intersection by calling for increased traffic enforcement and "reducing the two approaching lanes to only one which should help slow vehicles approaching the traffic signal." Based on the above photo, it seems like this work may not have occurred.

On Monday's City Council agenda, Policy Order #2, filed by Councillor Toomey, calls on the City to initiate a new study of Museum Way while engaging with state and local officials to improve safety of Museum Way, with particular emphasis on the intersection of Museum Way and Route 28.

Route 28/O'Brien Highway — some background and next steps

This tragedy has also drawn attention to the lack of bike infrastructure on Route 28/O'Brien Highway, particularly along the six-lane stretch of highway in front of the Museum of Science known as Charles River Dam Road (and also known as Craigie Bridge). This section is controlled by the state's Department of Conservation and Recreation (DCR), as the Commonwealth owns the dam upon which the Museum of Science (MoS) sits.

As a cyclist, I can personally attest that biking on this stretch of Route 28 has often been a terrifying experience. Naturally, many people decide to ride their bikes up on the sidewalks rather than on the unprotected six-lane highway — and this behavior leads to conflicts as cyclists and pedestrians must avoid each other as well as the many cars, buses, and Duck Boats that are fighting their way into and out of MoS driveway.

At a time when we are adding thousands of new jobs and housing units to the Cambridge Crossing development area, we must be pushing for immediate bike safety improvements and ultimately, a total transformation of this gridlocked highway corridor, including protected bike lanes.

On June 19, as part of an FAQ relative to the Longfellow Bridge Rehabilitation Project, the state's Department of Transportation (MassDOT) offered a plan to paint bike lanes on both sides of the Charles River Dam Road. Page 5 of the FAQ advised: "Striping is currently scheduled for the week of July 17th. This date is subject to change and is contingent upon weather and events at TD Garden and Fenway Park." 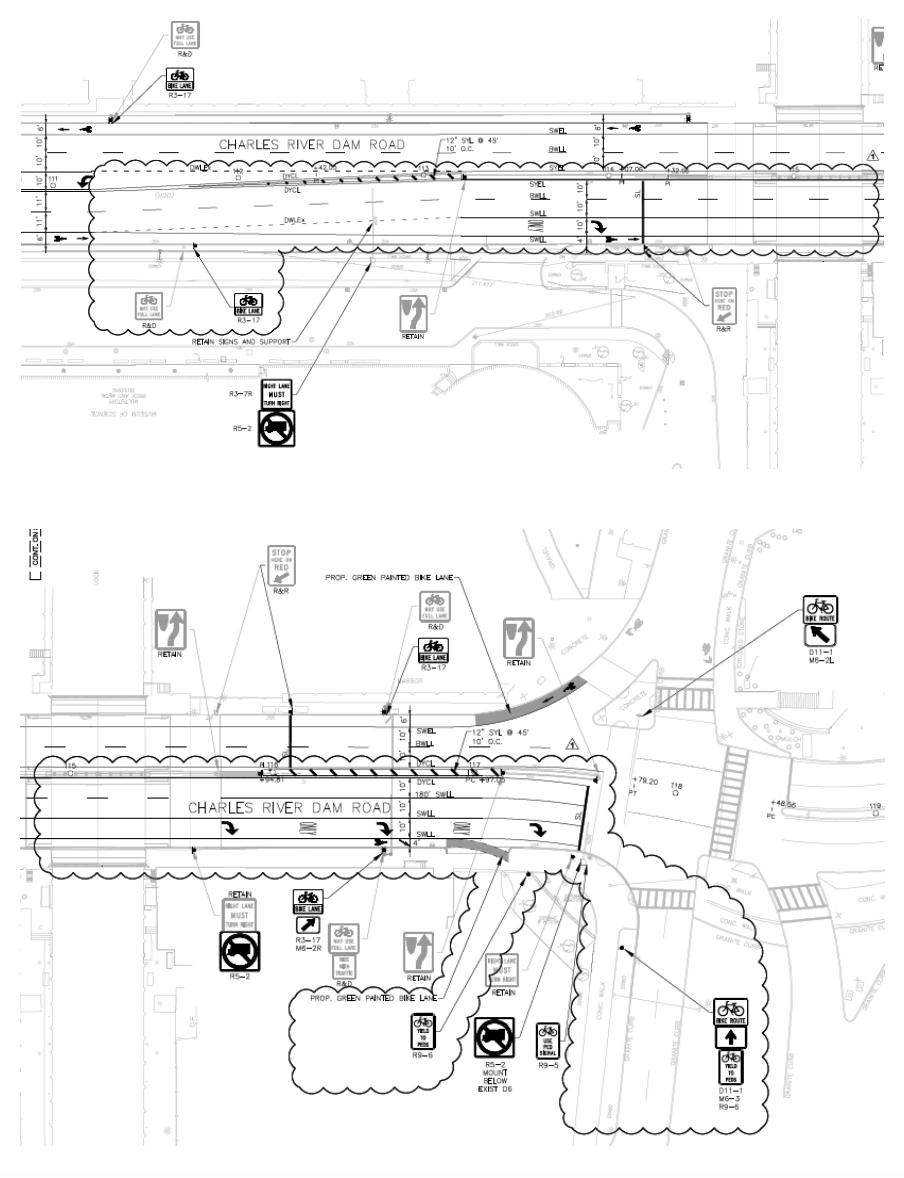 On October 19, Rep. Livingstone and I met with state officials in the vicinity of Museum Way and Route 28, and we asked for an update on the status of the Charles River Dam Road striping plan. We were advised that efforts were underway to negotiate a compromise proposal to help get bikes out of the roadway, with discussions that included DCR, the Museum of Science, local bike advocates, and others.

However, in the wake of last week's crash, MassDOT said plans aren’t yet finalized, "due to numerous factors such as the need to accommodate many school buses turning into the Museum of Science" along with "stakeholders’ concerns about a previous design proposal and increasing traffic volume in the area."

Last night, I once again discussed the issue with state officials and was advised that agencies are now looking to schedule a meeting in early December to discuss plans for Charles River Dam Road. For my part, I will continue calling on MassDOT and DCR to take immediate action to protect cyclists along this treacherous stretch of road, and I will let people know once a date and time for a meeting is announced.

As a State Representative for Cambridge and Somerville, the safety of cyclists and pedestrians is my top roadway priority. People who choose to walk or bike deserve to have infrastructure that is designed to keep them safe and alive. I also recognize this is a complex, challenging issue, and I believe all voices need to be considered and heard.

In addition to improving the infrastructure along Museum Way and Route 28, there are other important measures that could help prevent or mitigate similar crashes in the future.

One is truck sideguards, which help prevent cyclists and pedestrians from falling underneath the chassis if impacted by a truck. In 2014, I organized a city council committee meeting on behalf of Councillor Carlone that helped lead toward a sideguard program for City of Cambridge trucks. We are lucky because leading experts on truck sideguards work right here in Cambridge at the Volpe National Transportation Systems Center in Kendall Square.

In my first term as State Representative, I have been a proud co-sponsor of legislation to require state-owned and state-contracted trucks to be equipped with sideguards between their front and rear wheels. This legislation, lead sponsored by Sen. Brownsberger and Reps. Hecht and Rogers, is part of the larger Omni-Bike Bill, which requires convex and crossover mirrors on trucks as well.

I was heartened by an editorial in yesterday's Boston Globe that affirms the urgent necessity of this legislation, and I will continue working with colleagues and advocates to advance bike and pedestrian safety legislation in the House.

One witness to last week's crash stated that it took more than 25 minutes for an ambulance to arrive on scene. Given that this crash occurred during rush hour on a weekday, one could infer that the gridlock we see on our local roads may have contributed to a delayed response time. This is another reason why we should put a price on carbon, consider congestion pricing schemes, and make big investments in transit expansion to help alleviate the traffic gridlock across the region, while also pushing for the completion of a network of protected bike lanes here in Cambridge.

As a cyclist, as a public servant, and as a Cambridge resident, this has been a difficult and heartbreaking week.

At a time when more and more people are committed to cycling as an active, economical, and efficient means of carbon-free urban transport, I join with all cyclists who assert that "one death on our streets is one death too many," and I pledge to continue working with all stakeholders to push for immediate safety improvements, meaningful dialog, and ultimately, transformative changes to this intersection and the entire Route 28 corridor, from Charles River Dam Road to the McGrath/O’Brien Highway.

Tomorrow afternoon, I plan to join with members of the Boston Cyclists Union who are organizing a Ghost Bike Ceremony to honor Meng at the intersection of Route 28 and Museum Way at 12:30 pm. At 2 pm, members of the Massachusetts Vision Zero Coalition, including Boston Cyclists Union, Cambridge Bicycle Safety, and others will participate in 2018 World Remembrance Day in front of the Massachusetts State House. 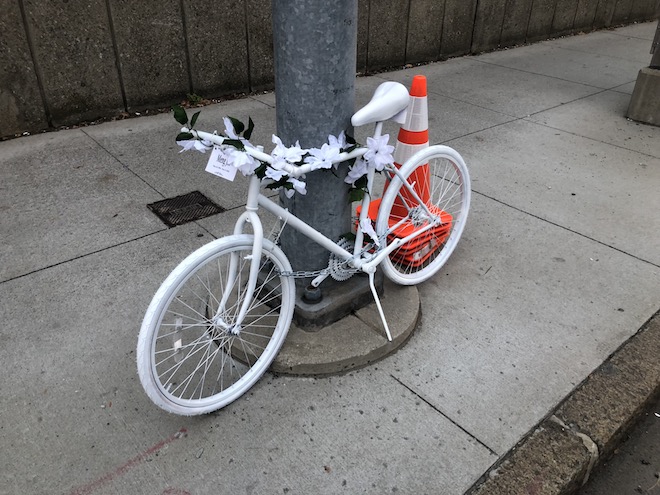 This post may be updated as more information becomes available. As always, I am available via [email protected] to respond to questions and concerns. Please do not hesitate to keep in touch.