First off: here's wishing you and your loved ones a very Happy Thanksgiving holiday! I'm looking forward to spending the day at my mom's place in Norwood, Mass. — it will be a lovely day to celebrate family and count all our blessings.

As you may know, Eversource has been engaged in an ongoing effort to win approval for their Greater Cambridge Energy Plan, which proposes to construct a new underground substation in Kendall Square along with five underground duct banks housing eight new 115-kilovolt (kV) underground transmission lines interconnecting to existing substations in the surrounding area.

This project is fairly massive in scale and will run underground through large swaths of the 26th Middlesex District. Of course, Cambridge and now Somerville have both been very active in recent years in adding and permitting additional lab space and other new developments, so in many ways, this explains the current need to plan for significant additional electrical capacity going forward. It also underscores the importance of comprehensive planning for future infrastructure needs.

While I have been very focused on working with constituents and city officials to ensure this project has minimal negative impacts on our community, I also recognize that increased electrical capacity is key to our overall goals of transitioning away from fossil fuels.

This Friday (November 25th) is the deadline to submit a public comment to the Energy Facilities Siting Board (EFSB) in response to the draft Greater Cambridge Energy Plan.

The initial filing on this project occurred in December 2021 with subsequent public hearings in June and November of 2022. I have participated in numerous community and state meetings on this topic, and I am pleased to see that Eversource has generally moved toward accepting the comments and feedback I provided at the June public meeting.

Once all the public comment is received, the project will be put out to bid with a final decision being made in early 2024. Then construction is planned to run from mid-2024 through 2028.

If you are interested in learning more, here are some links to help contextualize the project:

The Energy Facilities Siting Board page for this project

My July testimony to the EFSB

My November draft testimony to the EFSB

The initial iterations of this project included an above ground substation on Fulkerson Street in the middle of the densely-populated East Cambridge neighborhood, just steps away from the Kennedy-Longfellow School. I am very happy to report that due to our collective resistance to that initial proposal, subsequent drafts have scrapped the Fulkerson Street plan in favor of a below-ground substation in Kendall Square. 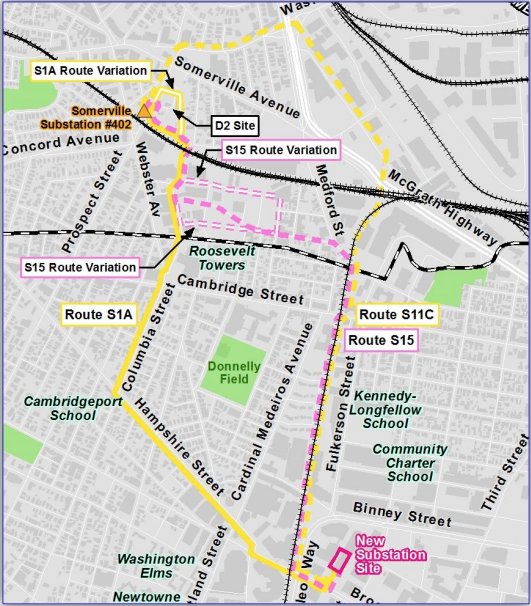 What has remained to be decided is where the below ground power lines from the Kendall Square area to the Union Square area will be constructed.

The initial draft in solid yellow (S1A) was cause for concern for Port and Wellington-Harrington Neighbors as those regions are continuously active, densely populated, and have been subject to decades of infrastructure burdens. Thanks again to our collective action, serious consideration is now being given to alternate routes pictured above in dotted yellow or dotted pink (S11C and S15) that utilize the Grand Junction Corridor.

While I recognize moving construction from one neighborhood to another could tend to favor one group of neighbors over another, it has been acknowledged by the siting board that the impacts would be much less if the Grand Junction corridor were utilized. I also mention in my comment letter the need for transparency and strong communication with the Grand Junction abutters as mitigation measures are undertaken and construction progresses through the neighborhoods.

Lastly, the proposed expansion of the above ground substation in Union Square remains a concern. I have repeatedly made the point that land directly across from the brand new Green Line station at Union Square is far too valuable and potentially useful to the local community to effectively sit underutilized as an electrical substation. That said, we have secured verbal assurances that the plans for Union Square won't prevent a future concept of connecting the Green Line through Union all the way down to Porter Square (a long term dream!).

In short, if we can come up with a below-ground solution for the substation in Kendall Square, we really ought to be able to come up with a similar solution in Somerville, which for decades has paid the price of everyone else's infrastructure. I've had constructive meetings with local Somerville officials on this point and hope we will find opportunities in future years to unlock the potential of the Eversource property in Union Square.

Thank you, as always, for your interest in this matter and for being an engaged and informed constituent. I plan to send my final comment letter on Friday morning, so please don't hesitate to reach out with any questions or concerns in the meantime.