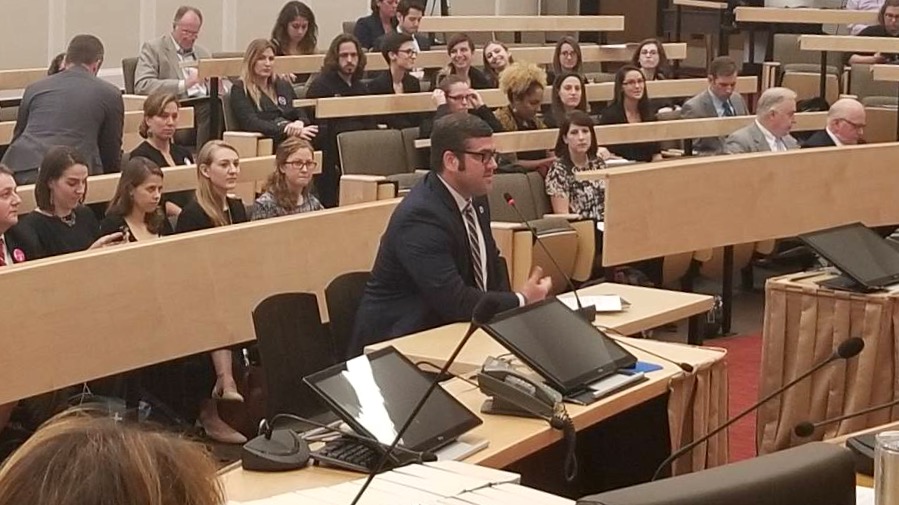 State Representative Mike Connolly testified today in support of H.536/S.499, An Act relative to advancing contraception coverage and economic security in our state, also known as the ACCESS Bill, which would protect and expand upon access to free birth control coverage under the Affordable Care Act (ACA).

“Reproductive freedom is a human right, and that is what’s at stake today,” Rep. Connolly said, opening his testimony before the legislature’s Joint Committee on Financial Services.

The ACA guarantees women access to birth control without co-pays, and by eliminating out-of-pocket costs, women of all economic statuses have been able to afford this basic form of health care.  Today, over 55 million women, including 1.4 million here in Massachusetts, have access to preventative health care at zero cost.

However, access to contraceptive coverage is now under serious threat. Although recent efforts to undermine the ACA in Congress have repeatedly failed, these efforts have been unrelenting and could resume again at any time. It is also possible that key provisions pertaining to contraceptive access could be revoked by executive action.  Furthermore, research conducted by the National Women’s Law Center found many instances of insurance plans failing to comply with the ACA’s contraceptive-coverage requirement.

The ACCESS Bill clarifies and improves upon the provisions of the ACA to ensure contraceptive coverage for all. More specifically the proposed legislation would:

Just prior to the hearing, it was announced that reproductive rights advocates and members of the Massachusetts Association of Health Plans have reached an agreement on provisions of this legislation. In his remarks to the committee, Rep. Connolly welcomed the compromise language as an important step forward and encouraged his colleagues to work quickly toward a final bill.

“In January, I was proud to join with dozens of colleagues and some 180,000 Massachusetts residents for the Women’s March on the Boston Common. What we witnessed on that historic day was a clear call for government to take action in defense of reproductive rights and access to health care. In this context, I believe it is imperative for us in the legislature to act on ensuring access to contraceptive coverage,” concluded Rep. Connolly.

In his testimony to the committee, Rep Connolly also recognized the leadership of his colleagues and the advocates on this issue including: Speaker Pro Tempore Patricia Haddad, Representative John Scibak, Senator Harriette Chandler, Planned Parenthood, and NARAL Pro-Choice Massachusetts.