The urgently-needed pedestrian and bike safety improvements at the intersection of Rt. 28/38 appear to have been delayed, even as a yet-to-be announced I-93 viaduct preservation project is now rapidly moving forward.

The pending interstate viaduct project will divert evening interstate traffic onto local roads, and it also lacks necessary mitigation for longterm air and noise pollution impacts that are linked to higher incidence of asthma, cardiovascular disease, and COVID-19.

Read on for more details and to learn about how you can make your voice heard in the struggle for transportation and environmental justice in our community!

For decades, Somerville residents have paid the price for everyone else's transportation convenience.

In the early 1970s, when Governor Frank Sargent cancelled new highway projects in and around Boston, the Northern Expressway (I-93) in Somerville was the exception. Since then, automobile traffic on Interstate 93 has caused serious air and noise pollution impacts in our community while forming a barrier between East Somerville, Winter Hill, and the Mystics public housing to the south and Assembly Row, Ten Hills, and the Mystic River to the north.

Meanwhile, the six-lane McGrath Highway (a.k.a. Route 28) further divides our community — walling off East Somerville from the rest of the city and creating treacherous conditions for pedestrians and cyclists trying to get to Foss Park, Stop & Shop, or other nearby locations. These highways are like scars on the local landscape, concrete manifestations of the racist, auto-centric policies of "urban renewal." In addition, Mystic Avenue (Route 38) runs parallel to I-93 in an area that's been deemed "Somerville's most deadly intersection" and one of the "top crash sites" in the state.

I started getting involved in the effort for transportation justice in Somerville about nine years ago. I attended LivableStreets events and learned about the vision for Grounding McGrath and even organized a demonstration to highlight safety concerns along the McGrath Highway back in 2012.

After I was sworn-in to office in 2017, one of my first acts as State Representative was to organize a tour of the East Somerville neighborhood with MassDOT and city officials. I wanted MassDOT to see and feel what East Somerville residents in particular were facing, and I was grateful that Mayor Joe Curtatone, Councilor Matt McLaughlin, and several community leaders from groups like the Somerville Transportation Equity Partnership and the Welcome Project joined us to make their voices heard. 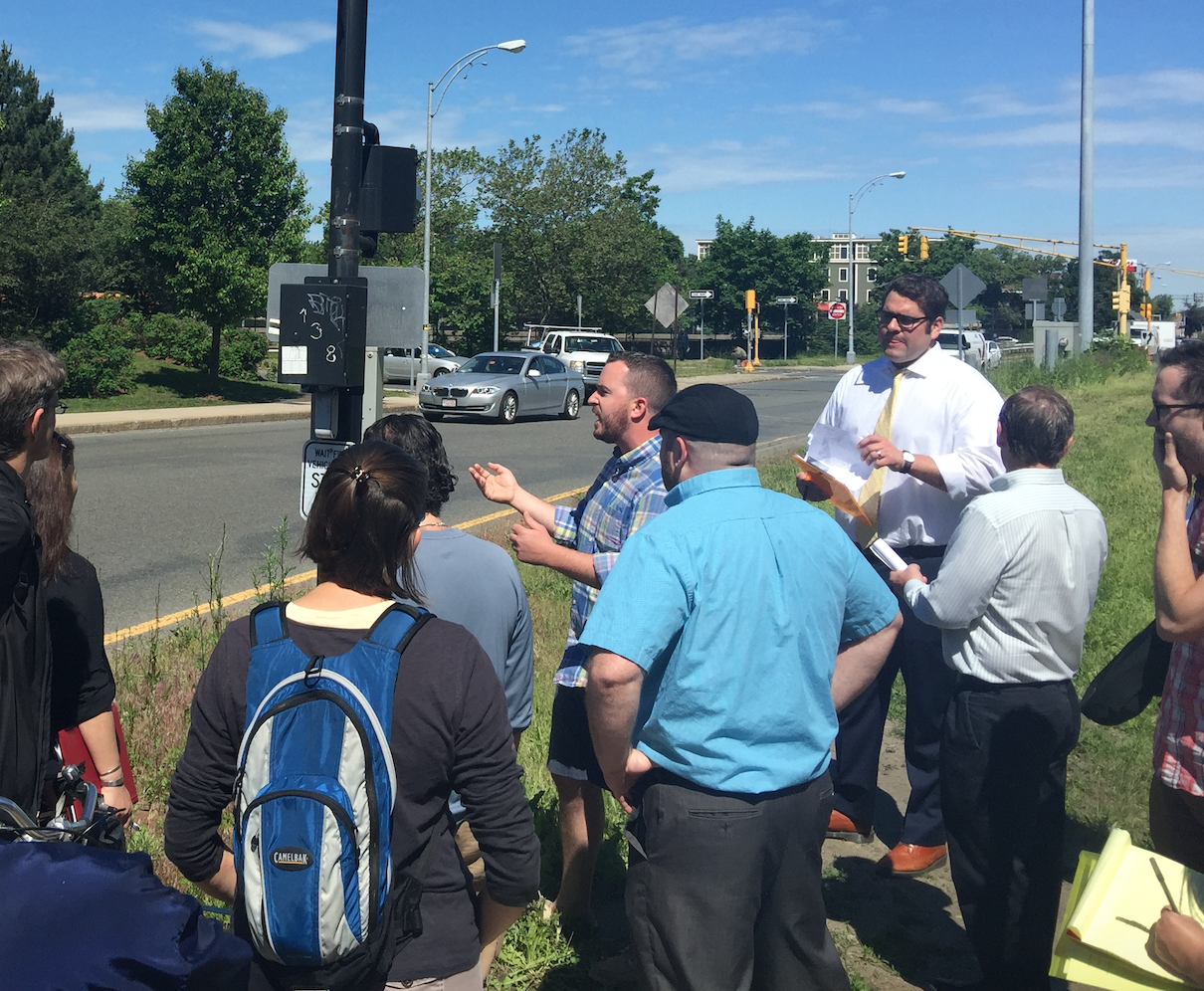 Over the past four years, I'm proud to say we've made some real progress on these issues. Working with Sen. Jehlen, Rep. Barber and my colleagues in the Somerville legislative delegation, I was able to pass amendments in several state budgets to support noise pollution monitoring along along I-93 and to help fund the Kensington Connector project to provide a better pathway between East Somerville and Assembly Square.

More recently, we successfully advocated to MassDOT for a series of major improvements to the McGrath Highway, including a "road diet" (i.e. removal of two automobile lanes), protected bike lanes, new lighting and fixtures, and improved sidewalks. Construction on this $13 million project is set to begin later this year and was recently featured in the Boston Globe. The "McGrath Resurfacing" project covers the area of Rt. 28 from Broadway in Somerville down to the Cambridge line.

In addition, we secured a commitment to advance the planning process for Grounding McGrath — another key step forward. These are just a few of the examples of the kind of work our Somerville legislative delegation has been doing in partnership with city officials and local advocates in recent years. And to be fair, MassDOT has been evolving in real time. Working together, we've won numerous commitments for protected bike lanes and a more progressive approach to roadway projects in Somerville, Cambridge, and beyond. And we are grateful for every inch of progress that's been made or has recently been approved.

In the days immediately following the hit and run that killed Cheryl Richards, I had the opportunity to question Secretary of Transportation Stephanie Pollack in a House oversight hearing, and I asked her to take swift action to prevent a tragedy like that from happening again. The Secretary promised that an ongoing road safety audit would be expeditiously completed and used to generate actionable plans.

On February 12, 2020, MassDOT presented the McGrath Highway (Rt. 28) / Mystic Ave. (Rt. 38) Intersection Planning Study. After gathering feedback in a public meeting at the East Somerville Community School, MassDOT presented the next iteration of the Rt. 28 / Rt. 38 plan at a virtual meeting on December 2, 2020.

In that December 2020 meeting, we were told that construction on the Rt. 28/38 Intersection Safety Improvements would start in Summer 2022, and that a public hearing would be held to review the final design in April 2021. 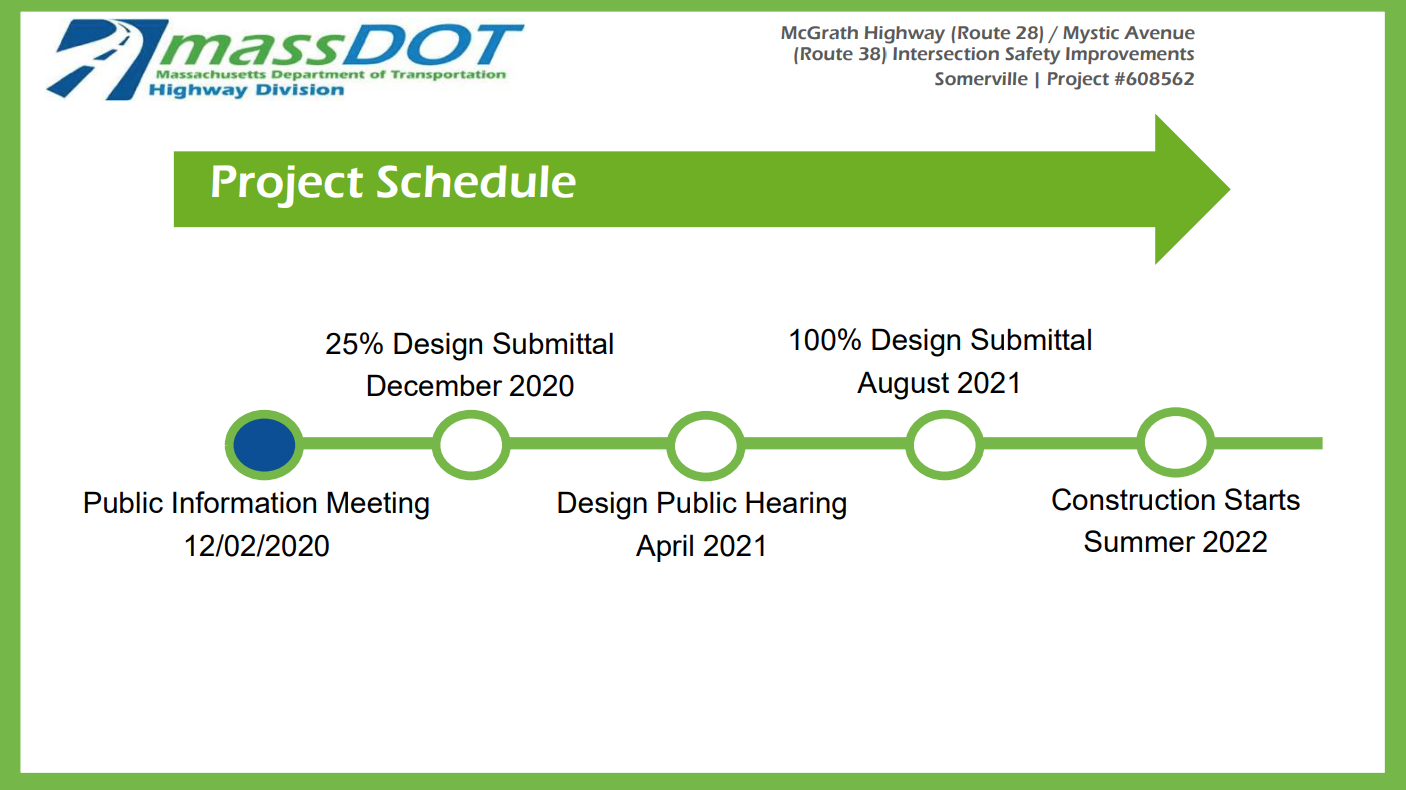 However, MassDOT never scheduled the April public hearing to discuss these deadly intersections — and now, they are indicating that construction work on these safety improvements won't be getting underway until 2023.

See this MassDOT Project Information page for the latest timeline.

If a one-year delay in the Rt. 28/38 Intersection Safety Improvements project was our only concern, it would be bad enough. But it gets worse.

THE I-93 VIADUCT PRESERVATION PROJECT

Last month, MassDOT officials called the Somerville legislative delegation to a meeting and informed us that a $37 million I-93 viaduct preservation project is about to get underway in the very same area as the now-delayed Rt. 28/38 Intersection Safety Improvements project. 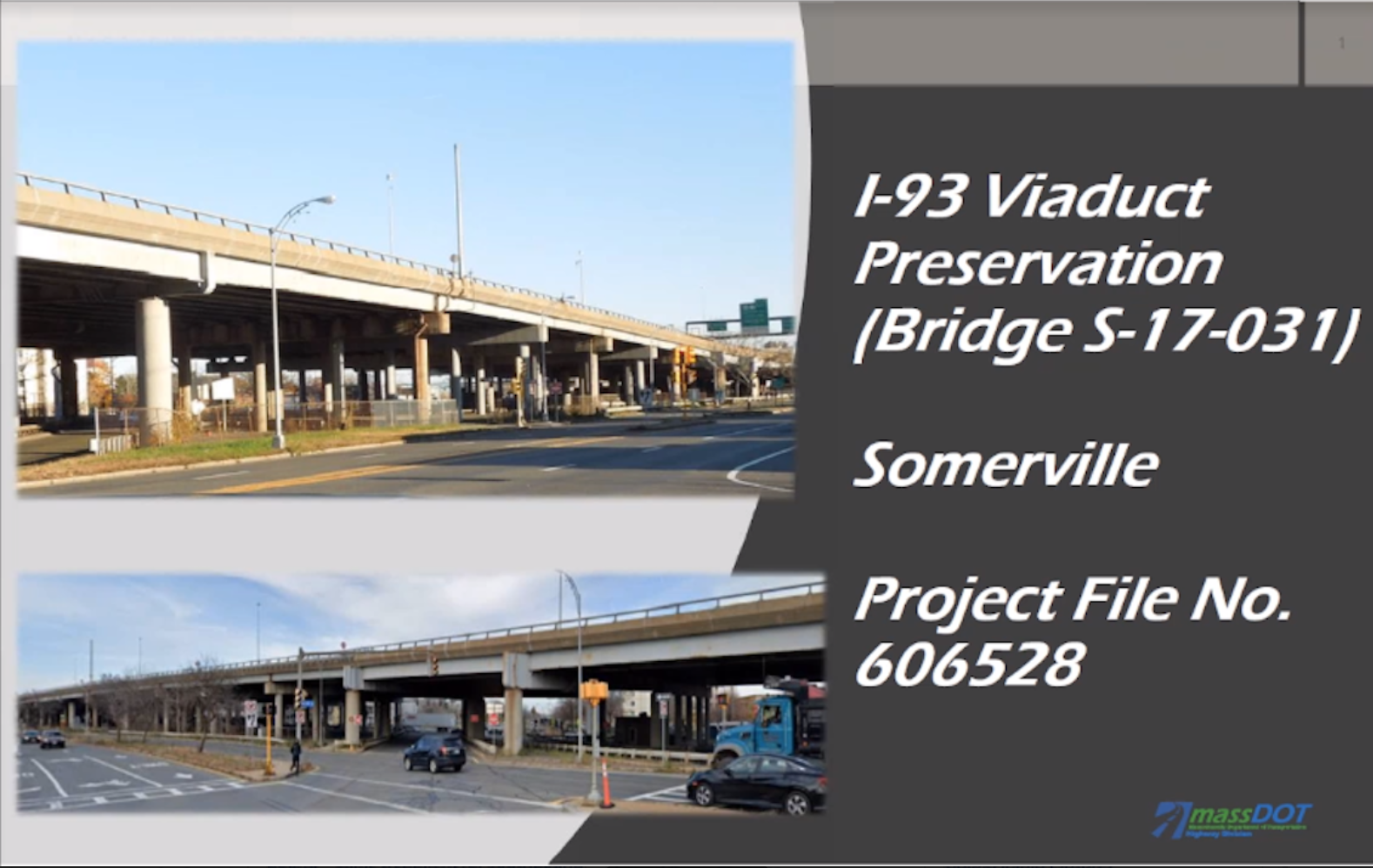 This came as a total shock to our legislative delegation. We were told the viaduct preservation project was at the 75% design stage, but this was the first time MassDOT engaged with us about it. Typically, there's more engagement with the public and with local officials earlier on in the life of a project with significant neighborhood impacts.

See this MassDOT Project Information page for the latest timeline. Interestingly, that MassDOT page says "100% Package Received (as of 04/15/2021)" — but our meeting with MassDOT occured the next day, on the afternoon of April 16th.

To date, MassDOT has yet to make any announcement to the general public about the project. We've spent the past few weeks conferring with local leaders about how best to respond, and earlier this week, I spoke out about this situation for the first time in this Somerville Journal article.

The goal of this project, our legislative delegation was told, is to "preserve the life of the steel" on the I-93 viaduct. For my part, I immediately responded that any project that preserves the life of the highway steel must also take action to preserve the lives of our constituents. We need immediate road safety improvements and a commitment to mitigate the longterm impacts of air and noise pollution from I-93 via sound walls and other measures. Here's a slide from the MassDOT presentation to our delegation: 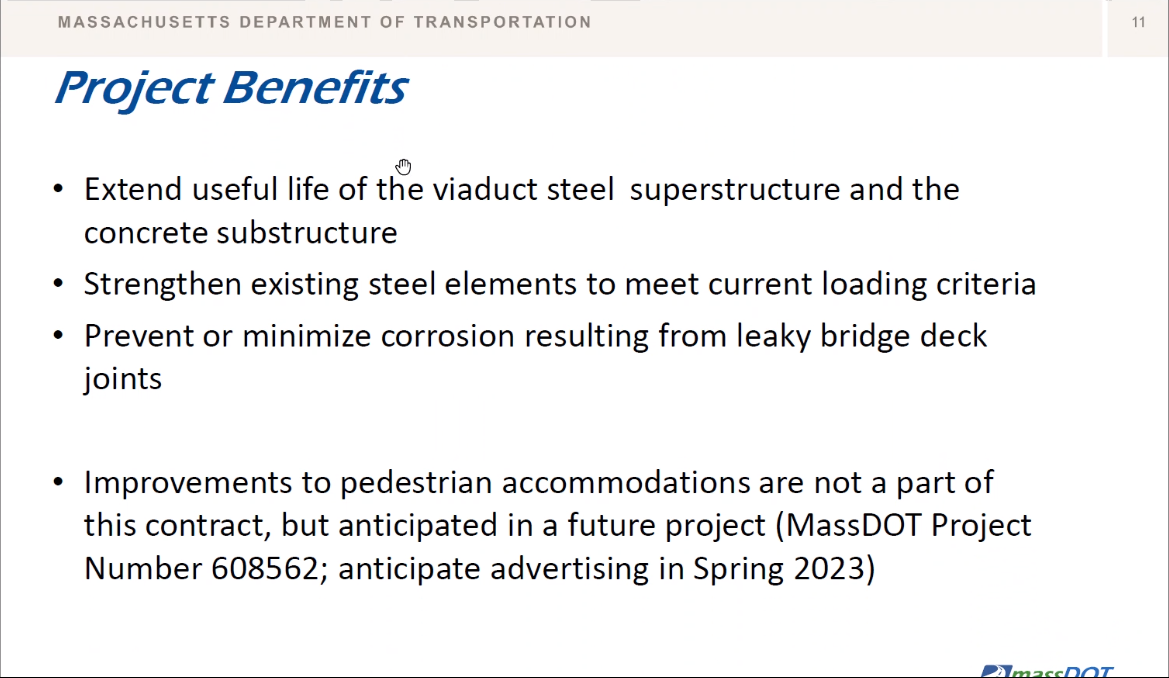 I took some additional screen shots of the presentation materials during our meeting with MassDOT. I've posted these screenshots to this Google folder. It should be noted this was an internal presentation and it's subject to change.

THE NEED TO MITIGATE I-93 AIR & NOISE POLLUTION

Perhaps what I find most egregious about this situation is the fact that this viaduct preservation project is being fast-tracked without any plans for mitigating the longterm impacts of air and noise pollution along I-93.

For years, academic researchers and local advocates such as the Somerville Transportation Equity Partnership (STEP) have painstakingly documented how the ultra-fine particulate matter that is caused by automobile traffic on I-93 results in documented increases in asthma and cardiovascular disease in the East Somerville neighborhood.

And more recently, we can see how this pollution has correlated with higher incidence of COVID-19 in the neighborhood as well.

I-93 cuts through a part of the city that has traditionally been home to immigrants, people of color, and working class families, so that makes this a critical Environmental Justice issue. 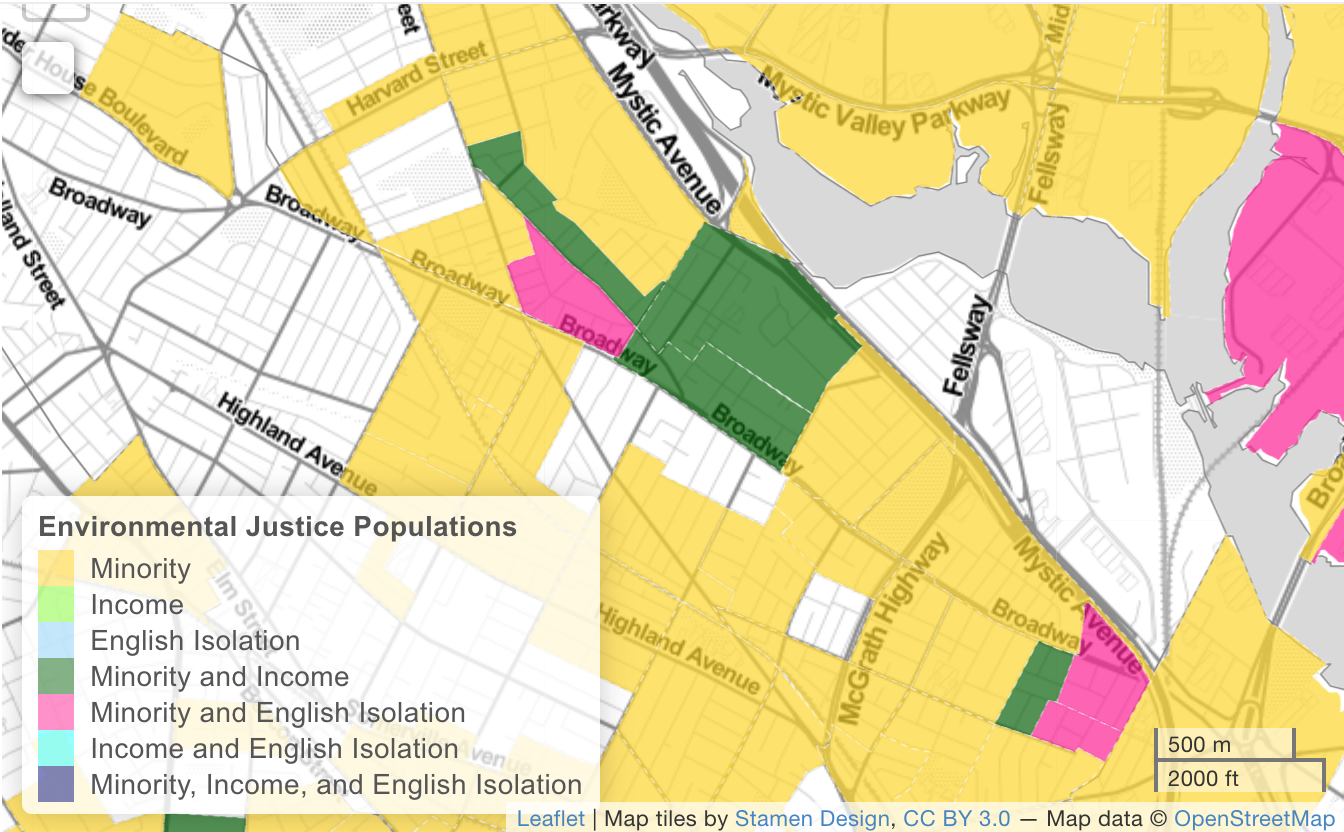 There are several streets in East Somerville where I-93 literally abuts densely-packed triple deckers at-grade. A great deal of work has been done to make the case for sound walls in this area — and for years, MassDOT told us that we could qualify for the "Type II Sound Wall program" when and if there was a construction project on the interstate. Our legislative delegation now has a meeting planned with the Highway Administrator for the week of May 17 where we will continue to make our case.

Earlier this year, Sen. Jehlen and I were successful in getting a $2 million authorization for sound walls to mitigate pollution from I-93 in East Somerville as part of the state's Transportation Bond Bill. I'm now calling on the MassDOT Board to support this authorization by recommending it be included in the state's pending Capital Investment Plan.

In addition, last week the House engrossed our version of the FY22 state budget, and I'm pleased to report my amendment to fund a design study for sound walls was adopted. These are just some of the budgetary and bonding items our legislative delegation has secured in recent years — we hope MassDOT will look to make use of these funding opportunities to get moving on I-93 pollution mitigation and immediate safety improvements to the Rt. 28/38 intersection project area.

There is a lot more I could say about this situation. For now, my colleagues and I are working with advocates and impacted residents to help craft a set of demands and to prepare to fight for the justice our community deserves.