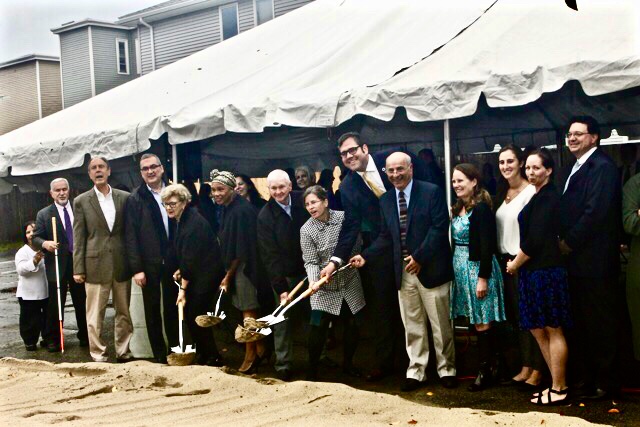 Representative Mike Connolly recently joined with fellow Cambridge officials and the nonprofit Just-A-Start Corporation to celebrate the groundbreaking and reconstruction of affordable housing at 50 York Street. The new building will replace all 16 units of affordable housing in the former St. Patrick's Church that was destroyed in the 10-alarm fire of December 3, 2016.

The rebuild is a part of Just-A-Start's larger consolidation project, which will preserve a total of 112 affordable housing units at various sites in the vicinity of the East Cambridge and Wellington-Harrington neighborhoods. In August, Rep. Connolly joined with Rep. Kevin G. Honan, House Chair of the Joint Committee on Housing, to announce the approval of state-funding to support the preservation of all 112 affordable units in the Just-A-Start project.

"We are incredibly fortunate that no one was hurt in last year's disastrous fire," Rep. Connolly said. "And, we are also so very fortunate to live in a community where we are all working together to rebuild and replace the affordable housing that was lost in this horrific fire."

When completed, Just-A-Start's 50 York Street project will continue to provide safe, affordable homes to 16 families. For more information on the reconstruction effort, check out this project page on CoUrbanize.

In related news, the Boston Globe recently reported on the one-year anniversary of the fire and how all of the affordable housing tenants who were displaced from the building at 50 York Street will be given preference to return once the reconstruction is complete.

Meanwhile, the Commonwealth of Massachusetts recently recognized some 49 Cambridge firefighters for their heroic efforts on that fateful afternoon last December. Miraculously, there was no loss of life and no serious injuries reported in the giant blaze that destroyed or damaged several homes on Berkshire Street, York Street, Vandine Street, and Plymouth Street.