Last week, the Joint Committee on Redistricting released newly-proposed legislative maps. As I discussed in my previous post, the redistricting process has been greatly delayed and complicated due to Donald Trump's obstruction of the 2020 Census and the ongoing Covid-19 pandemic.

Despite these obstacles — and despite the fact that population growth was very uneven across the state and here in Cambridge and Somerville — the draft House maps published last week satisfied my two main objectives: First, to support the statewide effort to maximize representation for communities of color through the creation of more majority minority opportunity districts — and second, to keep the 26th Middlesex District geographically coherent for the people of Cambridge and Somerville while honoring our shared communities of interest.

However, there was one consistent complaint among my constituents with last week's draft map: it split up the East Cambridge street grid that has traditionally defined the geography of the neighborhood.

This evening, I'm pleased to report the Committee has now published a revised map that keeps the historic East Cambridge neighborhood intact in the 26th Middlesex. This comes after conversations with Rep. Mike Moran, the House Assistant Majority Leader and Redistricting Co-Chair. It also comes after several East Cambridge constituents wrote to the Committee — and after I wrote a three-page letter of my own.

Thank you to all of the East Cambridge residents who wrote to the Committee. And thanks as well to Leader Moran for honoring our request. A rendering of the proposed 26th Middlesex as currently revised by the Committee is posted below. The House is expected to vote on these maps tomorrow afternoon. Then at 5 pm, I'm planning to do virtual office hours to discuss this and other topics.

Here's hoping to see you at office hours tomorrow — and please don't hesitate to reach out with any questions or concerns about this or any other matter. 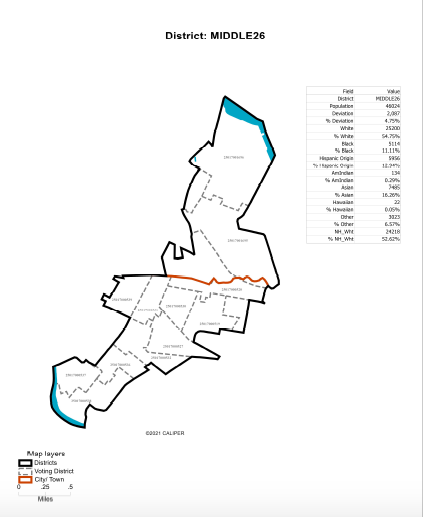