Recapping $1.3M in State Funding for the 26th Middlesex Secured by Rep. Connolly

Last month, the legislature passed the economic development bill, An Act Relating to Economic Growth and Relief for the Commonwealth. This bill included four of Representative Mike Connolly’s amendments to deliver funding to local nonprofits that support our Cambridge and Somerville constituents. With Governor Baker’s signature on the final major spending bill of the year, our State House office would like to take this opportunity to share a summary of the $1.3+ million in direct appropriations and bond authorizations secured by Rep. Connolly for the 26th Middlesex District during the 2021-2022 legislative term.

“I’m proud of our work to win approval for over $1.3 million in additional funding for Cambridge and Somerville nonprofit organizations providing shelter, combating poverty and hunger, working to empower immigrants, and using art to transform young people’s lives, and also for improved state infrastructure and local programming aimed at uplifting LGBT+ students, reducing carbon emissions, and creating more livable and walkable communities. I want to thank Speaker Mariano, Chair Michelwitz, and all of my legislative colleagues for supporting my efforts to steer additional funding toward the 26th Middlesex District during the 2021-2022 legislative session,” Representative Connolly said.

In chronological order here is the breakdown of each spending bill and the project or organization receiving state funds or authorized for capital investment. 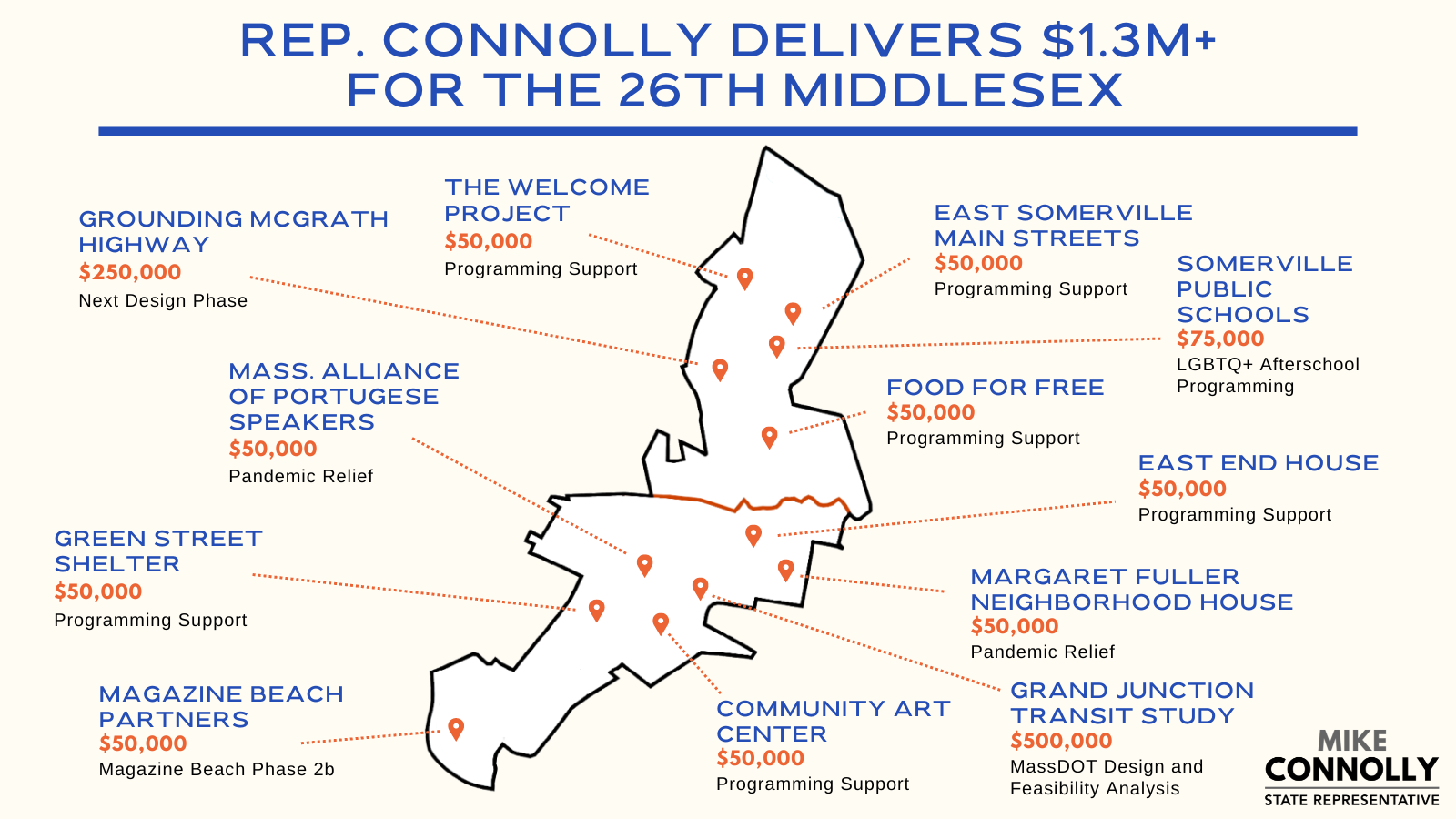 On July 16, 2021, the Fiscal Year 2022 State Budget was signed into law. The annual budget is the largest and most important spending bill enacted by the legislature each year. Last year, two of Rep. Connolly’s sponsored amendments were adopted which directed $60,000 toward the following local priorities:

Rep. Connolly has long advocated for the construction of sound walls along the “States Aves” neighborhood of East Somerville to mitigate noise pollution and ultrafine particulate matter from Interstate 93. In last year’s budget, he secured funding for the state’s Department of Transportation (MassDOT) to conduct a design study to determine which pollution mitigation efforts are possible. After years of collective advocacy, MassDOT has now acknowledged to our state delegation that installing sound walls is both feasible and reasonable along the States Aves. Rep. Connolly continues to work with local partners such as the Somerville Transportation Equity Partnership to advocate for a robust public process for the installation of pollution mitigation along I-93.

Noise pollution has also been a consistent concern for East Cambridge residents. Most recently, Rep. Connolly worked with Sen. DiDomenico and residents of the Linden Park Neighborhood to successfully advocate to Keolis that they change their operating procedures for when commuter rail trains enter or idle on the Grand Junction Railroad. After hearing from East Cambridge residents living near the Commuter Rail Vehicle Maintenance Facility, Rep. Connolly secured funds to direct MassDOT to study noise impacts in this area and potential mitigation opportunities.

On August 8th, 2022, the Fiscal Year 2023 State Budget was signed into law. This year’s budget included two of Rep. Connolly’s sponsored amendments which will direct $125,000 toward the following local priorities:

Throughout the years, Magazine Beach Partners in coordination with the City of Cambridge, and the state’s Department of Conservation and Recreation have envisioned and executed a multi-year multi-phase project to restore and renovate the park. As the project approaches the next phase, Reps. Connolly and Livingstone secured an appropriation to help unlock state and local matching funds to move the project forward. More information about the work ahead can be found on the Magazine Beach Partners Blog.

The City of Somerville recently conducted a student health survey which indicated that LGBTQ+ students suffered disproportionate negative impacts on their mental health throughout the pandemic. Rep. Connolly partnered with the City to successfully advocate for funds to support after school programming designed around project-based learning activities for LGBTQ+ middle and high school students. This work was the subject of a feature article in the Somerville Journal.

In early November, An Act Relating to Economic Growth and Relief for the Commonwealth was enacted. The $3.76 billion dollar bill includes investments in fiscally strained hospital systems, funding for the state’s continued response to the COVID-19 pandemic, funding for housing production, environmental infrastructure, and much more. The final bill also included Rep. Connolly’s sponsored amendments for local nonprofits. The following four organizations will each receive $50,000 to support their missions:

Food For Free improves access to healthy food through establishing innovative programming and partnerships with area schools, housing authorities, and other institutions to overcome barriers and strengthen the community food system. Through a combination of food rescue and transportation services, they give food programs year-round access to fresh fruits and vegetables, while their direct service programs bring food to students, seniors, and others most at risk of hunger. Their programs address not only short-term hunger, but also the long-term health effects of food insecurity and poor nutrition, while reducing food waste.

Solutions at Work aims to break the cycle of poverty and homelessness by providing individuals and families with resources and opportunities to strengthen their self-confidence, achieve self-sufficiency, and participate in helping others. Through the operation of the Green Street Shelter and other food and social services programming, they envision a Greater Boston in which unhoused and poor people have the resources, opportunities, and partners they need to achieve self-sufficiency.

East Somerville Main Streets works is to improve the life of the East Somerville community by building investment, connection and pride in our main street. They do this through a variety of ways including: strengthening the role of the East Broadway Business District as a commercial center for the eastern half of Somerville and western part of Charlestown, promoting the East Broadway Business District as a remarkable and unique cultural destination, known for celebrating its traditions and heritage and maintaining the community’s diversity, and enhancing social connectedness within the East Somerville neighborhood.

The Community Art Center is a neighborhood institution committed to cultivating an engaged community of youth whose powerful artistic voices transform their lives, their neighborhoods, and their worlds. The Art Center has established an excellent track record of providing creative and challenging learning opportunities to our young people. They aim to develop the next generation of civically engaged, community-minded leaders, and problem-solvers.

The Transportation and Climate Bond Bill

On July 31, An Act relative to Massachusetts’s transportation resources and climate was enacted. This bill authorizes $10.9 billion for projects where transportation and climate intersect, including $400 million for the Massachusetts Bay Transportation Authority (MBTA) to address ongoing safety concerns identified by the Federal Transit Administration’s Safety Management Inspection and $275 million to advance initial elements of the East-West passenger rail project. The final bill included two of Rep. Connolly’s sponsored bond authorizations for local projects of regional importance.

The final bill included Rep. Connolly’s sponsored amendment which authorizes $250,000 for the next phase of design for the McGrath Boulevard Project (also known as Grounding McGrath) in Somerville.  For several years, Rep. Connolly and other local leaders have been championing a plan to demolish the McGrath Highway’s elevated overpass and transform the roadway into a multimodal, surface-level boulevard that knits the surrounding neighborhoods back together. Originally built in the 1950s, the McGrath Highway predates the existence of Interstate 93, and like many other expressway projects, it sought to increase convenience for white suburban car commuters by demolishing homes and dividing predominantly immigrant neighborhoods in East Somerville and Cambridge. The passage of this amendment will add momentum to the design and implementation of this project which dates back to a 2013 report which can be viewed here. Most notably, MassDOT has announced that a 25% design proposal is forthcoming, and so this amendment can help advance that ongoing process.

Future Use of the Grand Junction Corridor

The bill also included Rep. Connolly’s sponsored amendment which authorizes $500,000 for a feasibility and design study along with a public engagement process for the future use of the Grand Junction Corridor in the City of Cambridge. The study will explore the potential for Electric Multiple Unit (EMU) vehicles and other options along the corridor. The Grand Junction corridor connects the northern side of the commuter rail system with the southern side and is currently used to ferry locomotives between the two systems. The corridor runs through the heart of Kendall Square and could eventually link the future West Station in Lower Allston to Kendall, North Station, and beyond. Rep. Connolly recently participated in a meeting with Councillor Azeem, City Manager Huang, and other local stakeholders to map out next steps in our collective advocacy for this vision of improved transit connectivity.

On December 16, 2021, An Act Relative to Immediate COVID-19 Recovery Needs, commonly referred to as the COVID-19 Recovery Act, was enacted. This $3.82 billion spending plan utilized a portion of the state’s federal American Rescue Plan Act (ARPA) funding along with a portion of the state's Fiscal Year 2021 surplus. The COVID-19 Recovery Act addresses disparities exacerbated by the pandemic, aiming to facilitate recovery through one-time investments in housing, environment and climate mitigation, arts revitalization, economic development, workforce, health and human services, and education. Low and middle income workers who worked in-person during the COVID-19 State of Emergency also saw direct cash payments from the bill.

The bill also included four of Rep. Connolly's district amendments, directing a total of $200,000 to the following four organizations.  Rep. Connolly recently met with leaders of each of these organizations to hear first hand about the ways in which these funds are being used to support their work.

The Margaret Fuller Neighborhood House is the primary community resource in The Port neighborhood, an area that faces elevated levels of poverty and includes the highest concentration of Black residents in the City of Cambridge. Through social services that cover the full spectrum of needs, from food insecurity to job training, the Fuller House aims to address poverty at its core.

The East End House is a dynamic community center in East Cambridge, which continues to meet community needs through innovative programs that support families and individuals of every age and ability. Their outcome-driven programs use evidence-based curricula to prepare preschoolers for kindergarten and give school age and middle school youth the skills to become successful adults.

The Massachusetts Alliance of Portuguese Speakers located near Inman Square works to improve the lives of Brazilian, Cabo Verdean, Portuguese and other Portuguese-speaking communities to increase access and remove barriers to health, education and social services through direct services, advocacy, leadership, and community development. In addition to serving Portuguese-speaking immigrants and their families, MAPS assists all who need their services.

The Welcome Project is based at the Mystic Public Housing Development and works with immigrants throughout the Greater Boston Region. Their efforts combine services, leadership development and opportunities for civic engagement -- from our interpreter training program for bilingual youth (Liaison Interpreter Program of Somerville or LIPS) to English Classes that help adult learners to navigate a new culture and community and our Summer Youth Camp.

Thank you for taking the time to read this long message! If you have any questions about these local projects, please reach out any time. Also please stay tuned for our final end of session update which will also include policy and regional projects of interest to Cambridge and Somerville constituents.