I am horrified, angry and saddened by the Dobbs v. Jackson Women's Health Organization ruling issued by the Supreme Court today.

We had been warned this day was probably coming, and now, the Supreme Court has struck down the constitutional right to abortion that was enshrined in Roe v. Wade some 50 years ago.

Thanks to our recent efforts in the state legislature, abortion is still legal here in Massachusetts. And yet, we are now just one or two bad elections away from the GOP being able to pass a nationwide abortion ban, and so-called trigger laws are about to make abortion illegal in 16 states.

This afternoon, I was on the State House steps, standing with Senator Elizabeth Warren, Attorney General Maura Healey, Boston Mayor Michelle Wu, and several other city and state officials and the leaders of the Beyond Roe Coalition, including Planned Parenthood and Reproductive Equity Now.

Together, we expressed our collective outrage and resolve. 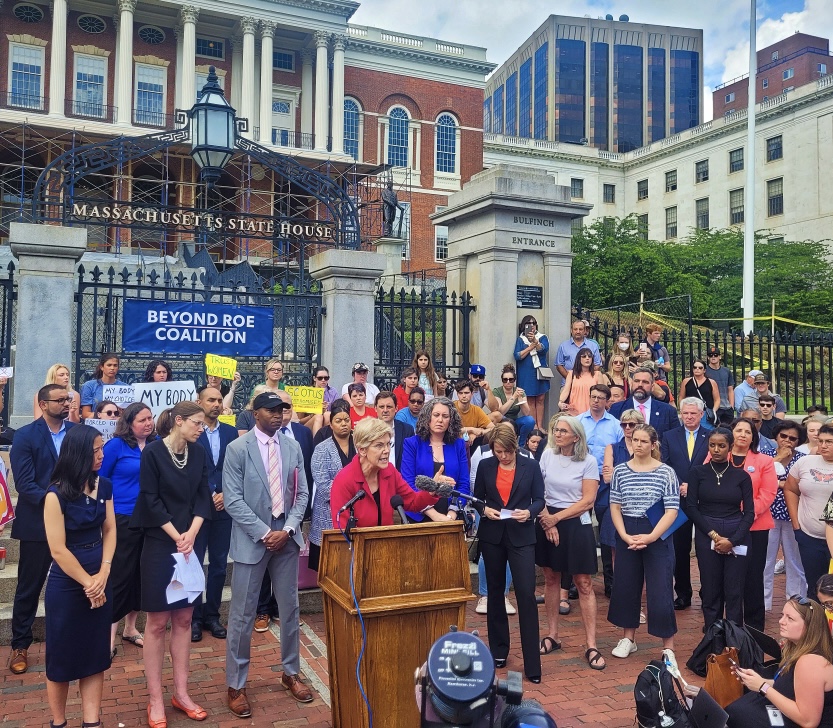 It is clear the leaders of Massachusetts are determined keep abortion legal in our Commonwealth and to do all we can to support people in other states.

Even Governor Charlie Baker took action today, issuing an executive order stating that Massachusetts "will not cooperate with extradition requests from other states pursuing criminal charges against individuals who received, assisted with, or performed reproductive health services that are legal in the Commonwealth."

This action by the Governor is very much appreciated, especially considering how he previously vetoed the legislation we enacted last session to prepare for this day. (Fortunately, we override his veto and re-enacted the ROE Act, passing it into law in late 2020).

The ROE Act ensures abortion remains legal in Massachusetts — but we cannot accept health care inequities or rest in the face of this unhinged Supreme Court. That's why I have co-signed in support of all 21 recommendations of the Beyond Roe Coalition. This includes actionable steps we can take in Massachusetts to expand and protect the right to abortion right now. I encourage you to review the Beyond Roe agenda and take advantage of opportunities to get involved.

In closing, I want to reaffirm my commitment to supporting reproductive freedom, including policies that allow for abortion on demand for anyone who chooses it.

From the fate of our democracy and our climate, to the ongoing struggle for equality and fundamental rights, as your State Representative, I remain deeply committed to standing up for our shared values at every opportunity. We must take action on the Beyond Roe agenda before the formal legislative session ends on July 31.

Thank you for reading, and please do not hesitate to reach out with any questions or concerns about this or any other matter.