Regina Bertholdo was recently honored by the Massachusetts Black and Latino Legislative Caucus at the 2022 Latino Excellence Awards. State Representative Mike Connolly nominated Ms. Bertholdo for this recognition because of her deep commitment to social equity and housing justice in Somerville and across the region. Ms. Bertholdo was honored with other members of the Massachusetts Latinx and Hispanic community on Thursday, October 13th, during a virtual ceremony joined digitally by her family members in Brazil and colleagues and friends in Somerville. 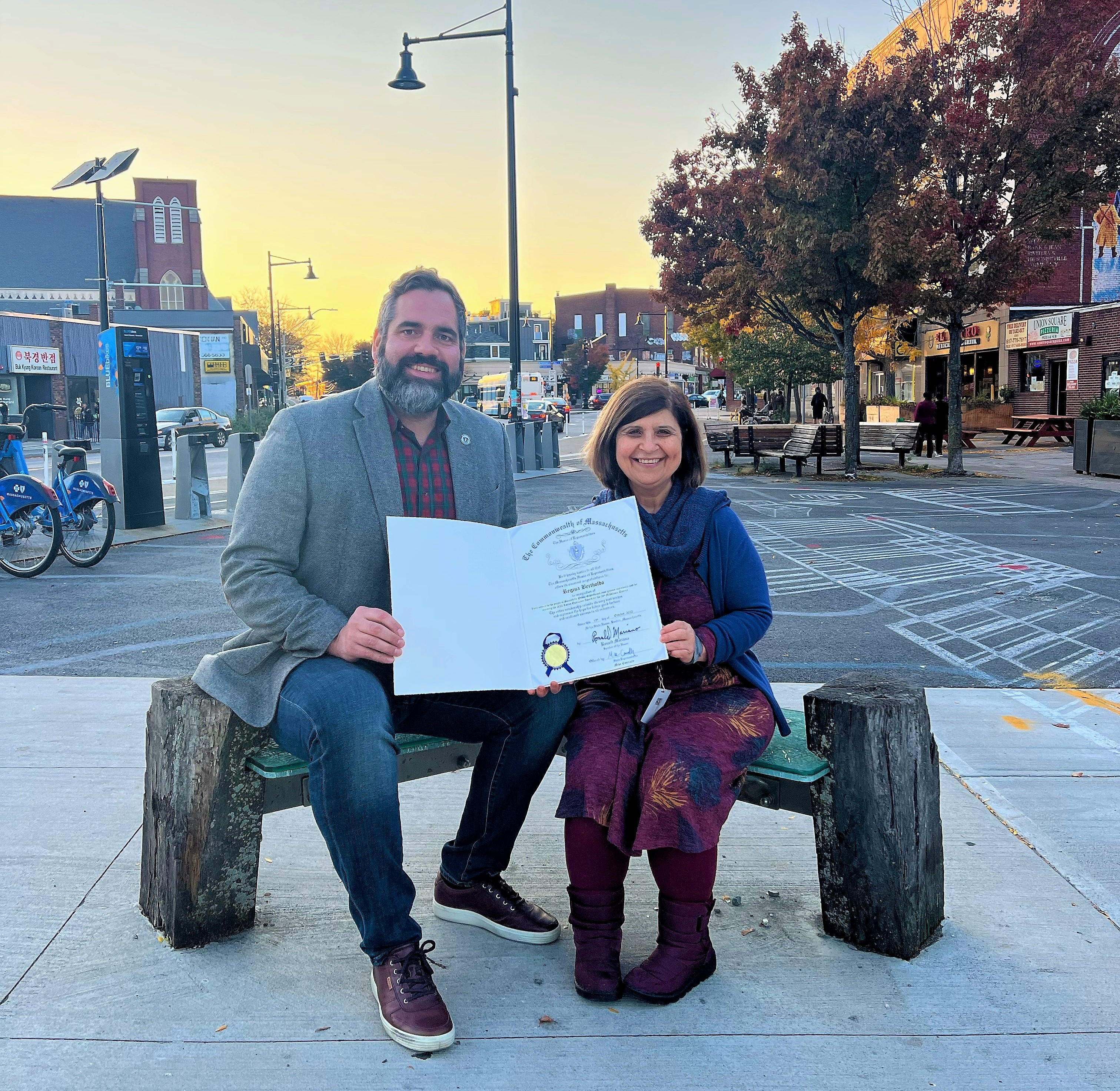 Regina Bertholdo emigrated to the United States in 1986 arriving in Boston at the age of 24 after graduating from college with a degree in English from Faculdades Integradas Tibiriçá, in São Paulo. Early on she emerged as a leader of Greater Boston’s Brazilian community. In 1991, while also working as a waitress, she took a job at Somerville Hospital as one of the area’s first Portuguese-language patient interpreters. In 1995 she co-founded the Brazilian Women’s Group which works to promote political and cultural awareness and contributes to the development of the Brazilian community. From 1995-96, she helped develop the Patient Interpreter Department at St. Elizabeth Hospital while also working at the Parent Information Center within Somerville Public Schools (SPS). In 1999 she returned to work with SPS as the Family Network Director. The next year she was appointed the Interim Director of the Parent Information Center at SPS. At that time she also served as the homeless liaison and helped to lay the groundwork for Somerville’s Office of Housing Stability, with whom she now regularly collaborates. Under her leadership at the Parent Information Center, Somerville became one of the first school districts to streamline enrollment online. Now Ms. Bertholdo serves as the Director of Basic Needs and Housing Support Services for SPS where she advocates for more social and affordable housing and a robust shelter system.

“I am proud to honor my constituent Regina Bertholdo at the State House to be officially recognized as a distinguished leader of the Latinx community in the 26th Middlesex District,” said Rep. Connolly. “Thank you, Regina, for all that you do to support students and families in Somerville, lift up the Brazilian Community, fight for housing justice, and for truly embodying the progressive values of our Somerville and Cambridge community.”

The ceremony opened with remarks from Black and Latino Legislative Caucus Chair, Representative Chynah Tyler, Speaker of the House Ron Mariano, and the Keynote address was given by Representative and Latino Chamber of Commerce Founder Carlos González.

Created in 1973, the Caucus remains a voice for Massachusetts' communities of color in the Legislature. It seeks to empower constituents to gain a deeper sense of political awareness on issues concerning them and their greater communities. The MBLLC’s legislators remain dedicated to serving communities of color throughout the Commonwealth through legislative, budgetary, and community endeavors.